Handle a book as a bee does a flower, extract its sweetness but do not damage it.

Ernest Simeoni the proprietor of African Beekeepers Limited introduced the Langstroth Beehive in Kenya in 1994 where he founded Honey Care International Limited. He set up the first commercial factory to manufacture and produce high quality Langstroth beehives and related equipment with a capacity to produce 1,000 beehives of both fully assembled and knockdown kits.

During his fifteen (20) years of experience, Ernest has worked with numerous International & Local N.G.O’s towards the promotion of the honey business in Kenya , Tanzania, Rwanda , Sudan Uganda and Namibia to develop the honey industry into one of the major cash crops in the region, so as to assist the small scale farmers in the rural areas in the generation of an extra income from honey and to increase food production by pollination of crops by keeping well managed Langstroth beehives.

During his years of operation Ernest has gathered vast knowledge of particular types of African Bees and honey production from the Langstroth hive to enable the understanding of honey production in the East African region.

He has studied the local flora that produce the nectar flows in different zones of Kenya and the Region and also the flowering seasons making it possible to plan one’s honey production accurately.

Owing to the presence of various ethnic groups in Kenya, Ernest has been able to study and understand the traditional economic activities of the various ethnic groups, therefore making it easier to introduce the modern technology of beekeeping so as to improve quality honey production.

He has also taken a lot of time and effort in modifying the Langstroth beehive to suit the local conditions for example developing the comb starter sheets for the African bees’ size, increasing the number of brood frames which reduces the bee space between frames, preventing the burr comb which is a normal characteristic of the African Bees.

He has also introduced a bee suit that withstands the aggressive bee sting making it more user friendly to work with African bees.

Given the harsh conditions, and predators existing in the local environment, Ernest has over the years designed several systems of placing the Langstroth beehives to prevent damage to the colonies from pests such as the notorious Honey Badger.

Ernest has also developed specialized processing system; he has designed a nine and three frame centrifuge machine which is robust and affordable where honey from the Langstroth super boxes can be semi-processed in any local/rural setting.

In order to achieve high production of honey from the Langstroth beehive it has been a major objective for Ernest to embark on the rearing of queen bees. He has successfully produced queen bees and is currently looking into the possibilities of artificial insemination of queens.

Through a careful and constant management of Langstroth beehives throughout the region, Ernest has been able to achieve production of high quality honey which is marketable both locally and internationally.

He currently markets honey purchased from local/Regional communities that use the Langstroth system of beekeeping.

Due to the fact that there are many tribes of people in the region, Ernest has studied the living patterns of various communities that he works/deals with since some of these communities are honey hunters while some are traditional beekeepers therefore he has come to understand some of the local cultural behaviors so as to be able to effectively introduce the Langstroth system of beekeeping these particular communities so as to make honey production commercially viable to uplift the standard of living in some of the poor communities.

From the experience that Ernest has gathered in the last 20 years that he has worked with bee keeping and community groups throughout Kenya he has now set up commercial apiaries in 5 districts of Kenya using the most up to date technology with the intention of starting up his own system of equipment funding to farmers/communities that are living within in the areas of his operation, by doing this the farmers/communities can learn from the apiaries.

Ernest Simeoni at a beekeeping training in Israel

Ernest Simeoni collecting semen from drones at an insemination course in Scotland. 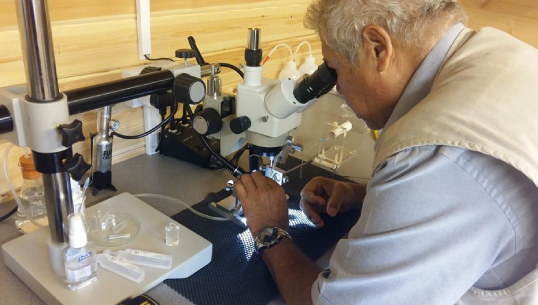 The equipment pay back system will be split over a set period, and a set quantity of honey will go towards paying back the equipment, any excess honey above the required amount for loan repayment will be paid for in cash. By setting up this model it will be much easier to monitor the loan recovery and also a better control on the quality of the honey.

Ernest believes that there is great potential in the honey industry in East Africa and bee keeping is one of the best agricultural activities that can be practiced in rural areas were honey is considered as a valuable commodity and never ending market right at ones door step and also plays a major role by increasing food production by pollinating crops.

Get updated by subscribing to e-bees, an industry leading newsletter for beekeeping.

Got An Idea? Lets Make It
Happen Today